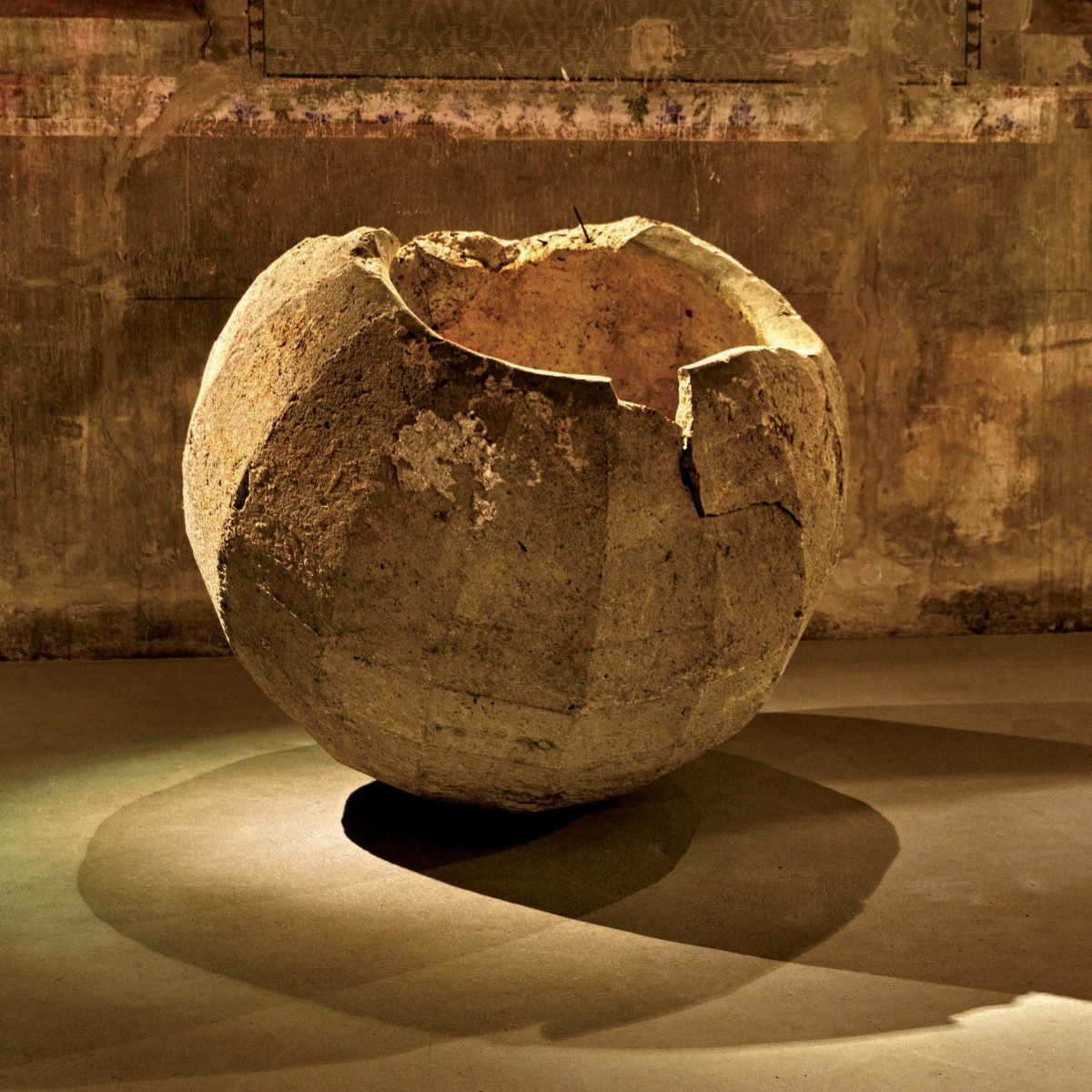 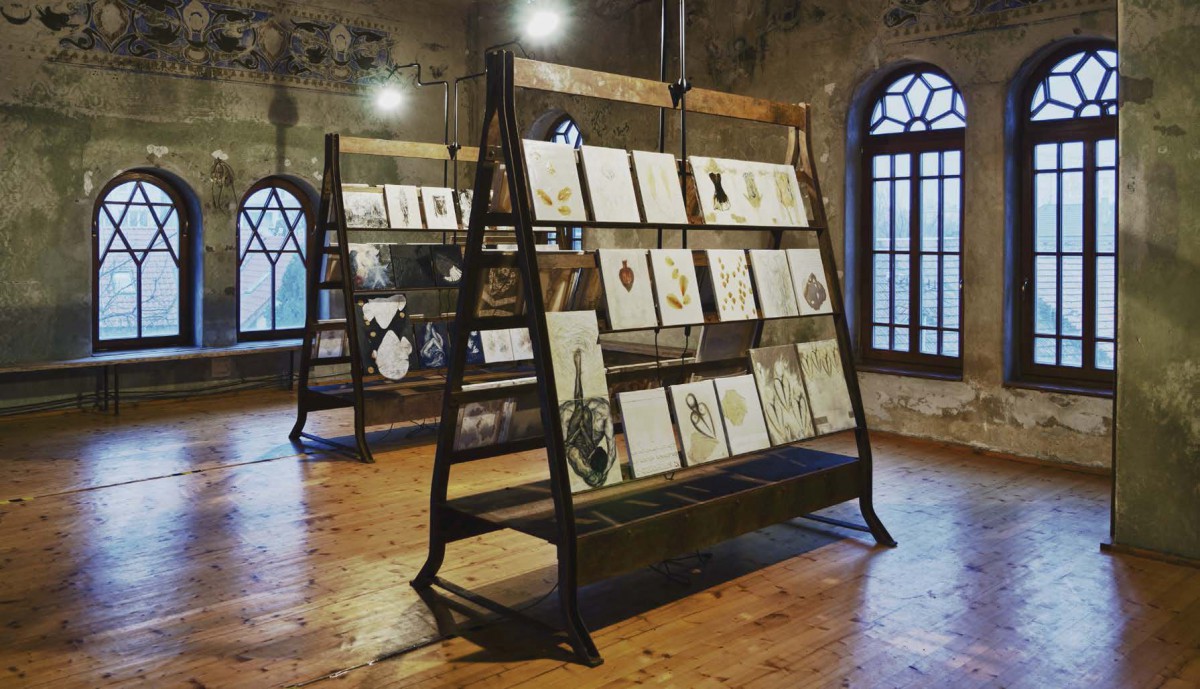 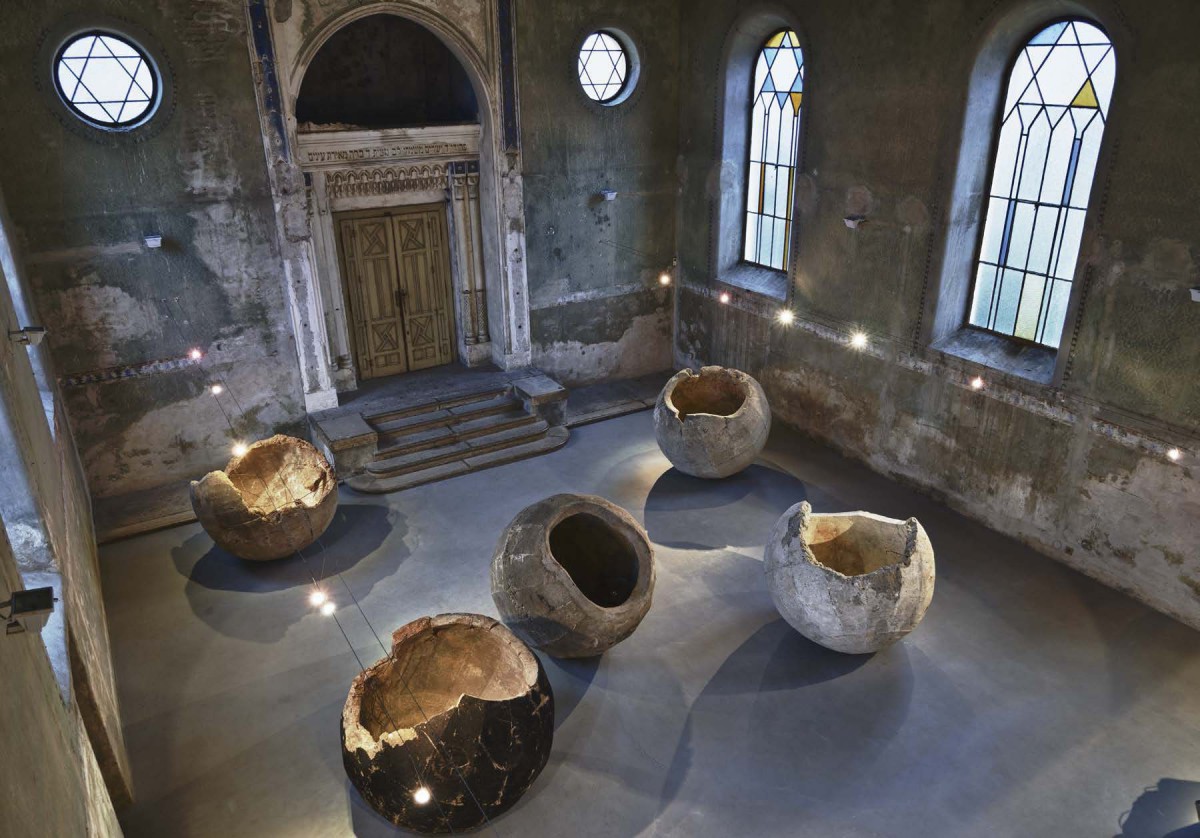 At first glance, seven massive, partially destroyed concrete objects placed on the floor of a synagogue could elicit two conflicting emotions in the viewer. On the one hand, there is aesthetic pleasure similar to what we feel when coming into contact with well-executed works of minimalist art. Here too, at the At Home Gallery, we are confronted with objects, if we look at the installation exclusively from the perspective of their raw concrete and repeating spherical forms that for us could represent the very essence of abstract sculpture.

It is not only the shape, which thanks to its simultaneous specificity and generality is capable of eliciting an entire range of associations, but also the material and the degree of its construction, revealing fragments of steel mesh onto which the concrete layer was applied, its structure and shades of earthy colour. The paradox to which the name of the “Front Line Deposit” installation alerts us is the fact that these things that are making such an emotive impression on us are not artefacts, but technical objects related to defence lines, the “Südost- wall”, built by Nazi Germany’s army during Word War II from the “Little Carpathian Mountains through Bratisla- va, along Burgenland and Styria (the Reich’s border with Hungary), through Lower Styria and the uplands (today Slovenia to the Slovene-Croatian border) to the Adriatic”1. Information entering our enchantment with the Kubinský’s installation necessarily elicits conflicting emotions and the question whether there is a conflict between the ex post perceived beauty of these objects, and their original function as part of the machinery of war. We realize this tension all the more through the fact that we are in a synagogue, which under normal circumstances, if during the war thousands of Holocaust victims had not been murdered, would have contin- ued to serve as a religious structure – a place of prayer, and not a gallery.

A similar process, at the beginning of which stood the fascination of a chance discovery, must have been experienced by Monika and Bohuš Kubinský when they first found these remarkable objects in sludge fields by Sered, extracted them, and brought them to their studio. When investigating their origin and purpose, they found that they were in possession of material that was neither a primary form manufactured for a specific purpose, nor a secondary aesthetic object, but above all a symbolic one, whose significance is created by traces of historical memory. They realized that if they are to offer viewers an integrated way to read them, they must create an installation built on a network of contextual references. Already during their first presentation at Prague’s DOX Centre, the fragments of the Südostwall defensive line were confronted with the symbolic recon- struction of World War I trench wall, with the theme of senseless wartime killing being amplified by the powerful story of Czech soldiers fighting for Austria-Hungary on the Italian Front. At the Šamorín synagogue, we encoun- ter a different, but equally emotive narrative. As opposed to the white cube of the gallery, a synagogue – even when it no longer serves its original purpose – is not a neutral space, and things placed in it lose their immunity to the past, remote and recent. Among other things I have in mind the suggestive installations on the subject of war and the Holocaust that were held here at the end of the 1990s – the raw flatbed rail cars by Ilona Németh symbolizing the road to death, hundreds of suitcases in Ilona Németh’s and Juraj Bartusz’s joint performance speaking of the eternal wandering of the Jews, Ľubo Stacho’s pebbles with photographs of Holocaust victims...

The press release for the exhibition says: “The lower part – the synagogue’s great hall, takes the viewer to the ‘battleground’ using a masculine installation...” The adjective “masculine” is adequate given the objects’ purpose. Wars are of course primarily a male affair, but more important is the fact that they are one of the consequences of Western culture’s civilizational direction, which is dominated by ideas of permanent progress, technical discoveries and revolutions, and above all the human lust for power. However, in the end, the Kubinský’s exhibition is the opposite of this mental attitude, and from my perspective is rather feminine. Not because Monika is exhibiting her painter’s diary upstairs in a gallery of the synagogue originally reserved for women, but first and foremost because the task that the artists accepted minimizes their own act of creation. With a certain amount of humility and empathy, they accepted the role of a medium through which a contradic- tory past speaks.