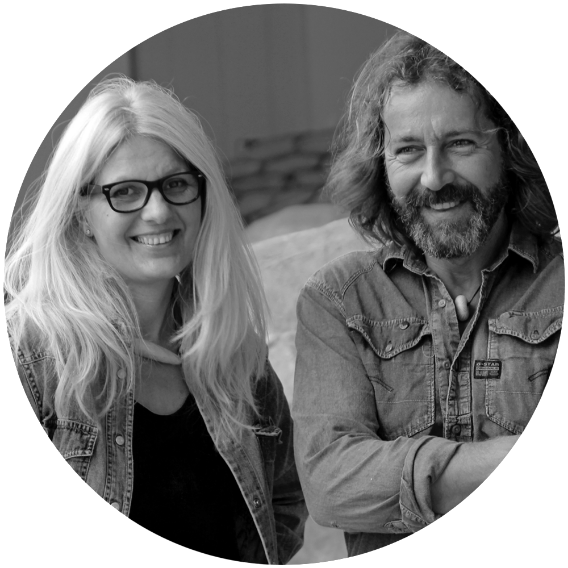 Monika and Bohuš Kubinskí, who belong to the middle generation of visual artists, have been an active part of the Slovak art scene from the early 1990s. Since their early school artwork projects they have been cooperating on many grand site-specific installations using mainly non-traditional media and multimedia.

Slovak artist Monika Kubinská is a member of a generation of widely recognized artists whose artistic identity is strongly connected with transition, as they entered the art scene at the turn of the 1980s and 1990s, a time of significant political changes. Identities of the artists as authors in the aforementioned period were influenced not only by the shifts occurring in the society and the approach to solving social problems, but also by changes in the media. With her typical sensitivity, Monika Kubinská has mastered the genre of canvas painting, although she is equally skilled with the new media (primarily site-specific installations that she has prepared either on her own or with her husband, sculptor Bohuš Kubinský).

Her work can be characterized with easy transitions between media, and the paintings, installations or objects in her artistic interpretation affect and enhance one another. Her sensitive perception of the world can be seen in all her art; as an artist, Monika Kubinská feels she is a “medium” or an intermediary through which meaningful messages can be disclosed in the form of distinctive works of art. In her paintings, the artist very naturally reflects on strong topics of resignation//devotion, fate, love and spirituality, interwoven and enriched with the wisdom of femininity and motherhood. The scenes depicted by her art often invite the audience to a dialogue (in a particular series of works, it can also be a discussion between individual works of art), with bodies or fragments of bodies as the most frequent protagonists, interpreted as vessels with the content “granted from above”.

The formal purity of paintings of Monika Kubinská, with complex composition and layering, is achieved through a creative process that is lengthy, taxing and disconcerting, but also full of patience and devotion. Artistic pieces by Monika Kubinská have found their place in many private collections and public galleries.

Bohuš Kubinský (1966) represents middle-aged generation of Slovak visual artists, focusing primar- ily on sculpture on both a grand and small scale, less on classic genres—objects or site-specific installations; moreover, he is involved in the pedagogical work and design.

His authorial program follows several parallel lines. As an “old school” sculptor he often works with the archaic sculptural medium—stone (in particular: the Carrara marble, travertine and less frequently also granite), while also utilising traditional procedures combined with here-and-now approaches to create sculptures employing latest technologies available. Along with stone sculp- ture he often uses less common materials or such that could expressly be labelled as “non-sculp- ture” masses. Kubinský goes beyond the media limits with the ease enabled by his creativity, to deliver his artistic message through his assemblages, sculptures, objects or larger artworks, and to test the possibilities offered by extreme materials; his works are often multimedia-based.

Besides his solo artworks, together with his wife, the painter Monika Kubinská, they create larger and logistically rather more demanding projects—site-specific installations or performances. Here again we find him using the multimedia style; yet his straightforward sculptor’s approach is tangi- ble, enriched and thoroughly intensified under the influence of his wife’s visual-artistic perspective. The Kubinský couple approach joint projects as more compact works, taking the form of series.

Bohuš Kubinský has been teaching at the Faculty of Architecture of the Slovak University of Tech- nology (abbreviated in Slovak to: FA STU) in Bratislava since 2002. As a teacher, he explores the relationship between the work of art and architecture, educates students in the arts and is involved in the analysis of visual arts in the context of the contemporary building environment. His pedagogi- cal work at the Cabinet for Visual Arts (Ústav výtvarnej tvorby a multimédií), FA STU includes several projects made by students under his guidance, which follow the interface between the architectural and artistic production, integrate creative strategies of the contemporary visual arts into authorial perspectives of the future architects.